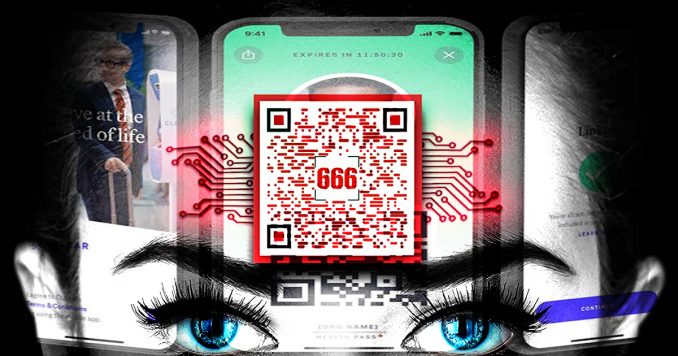 California officials have taken the first step to implementing something that we have been warning about since the pandemic COVID scam started – the implementation of a digital passport system that could be used to restrict anyone who hasn’t had the vaccine from conducting commerce – something eerily reminiscent of the Bible’s Mark of the Beast!

The plan being rolled out this week will see Los Angeles County partner with tech firm Healthvana to issue the digital verifications, which can be put in an Apple Wallet or the Android equivalent, Bloomberg reported.

Opponents fear the digital receipt could also be used ‘to prove to airlines, to prove to schools, to prove to whoever needs it,’ that a person has been vaccinated, Healthvana CEO Ramin Bastani told Bloomberg.

As we reported back in November, corporations around the world are getting ready to enact digital barcode tracking of every person in the world which will include mandatory vaccines and COVID testing to be able to participate in commerce.

Last month, Ticketmaster proudly announced that they would require the mark – digital verification — within its digital ticket app that would allow event organizers to require proof of vaccination or a recent negative COVID test.

After this site and others reported on the system, the company quickly retreated after facing criticism, issuing a statement clarifying that ‘there is absolutely no requirement from Ticketmaster mandating vaccines/testing for future events.’

According to Daily Mail, A number of companies are working on digital vaccination verification systems, including IBM and Clear, a security company that uses biometric technology to confirm people’s identities at airports.

The International Air Transport Association (IATA) is promoting a vaccine passport called the IATA Travel Pass, which is still under development.

The Commons Project, in conjunction with The World Economic Forum — the bastards that are openly pushing for the GREAT RESET — and a range of public and private partners, have developed the CommonPass, ‘a trusted, globally-interoperable platform.’

‘This great moment of hope must not be seen opportunistically as yet another data grab,’ the advocacy group Privacy International said in a statement.

‘The deployment of vaccines, and in particular any ‘immunity passport’ or certificate linked to the vaccination, must respect human rights,’ the group added.

A ‘vaccine passport’ system would also raise perplexing questions about what to do with people who have natural antibodies to the virus after recovering from an infection.