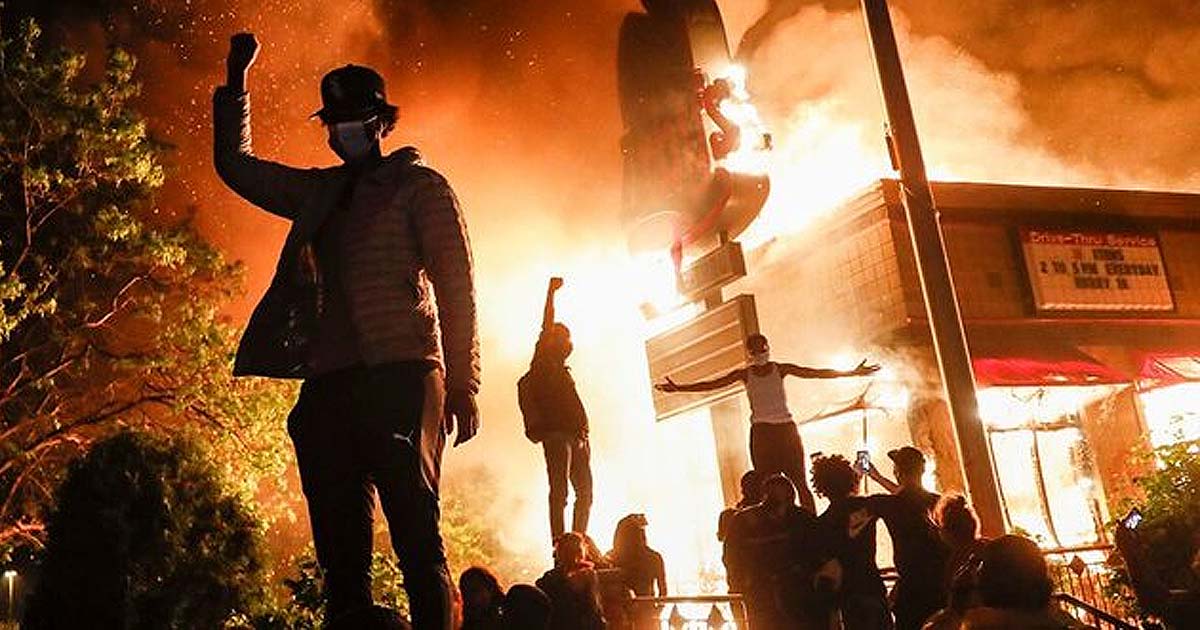 For months, patriotic hard-working Americans have been screamed at by radical leftists and emotionally disturbed millennials that we needed to shut down the country to save us all from a virus that was basically as bad as the Flu. They set up snitch lines, called the police on their neighbors, and helped the police harass and arrest small business owners that dared to stand up for their constitutional right to live their lives.

Now, those same mentally disturbed American hating rejects who claimed we were going to kill people by living our lives, are attempting to spread chaos and kill the American way of life through violence, looting, and rioting.

For the last week, radical leftist terrorist organizations including Black Lives Matters and Antifa, have used the death of a black man as cover to finish what the fake Coronavirus scam couldn’t, the destruction of the United States.

Domestic terrorists are firebombing neighborhoods, assaulting innocent people, looting small businesses, and threatening to kill anyone who gets in their way.

White House in danger of being overrun pic.twitter.com/Y9brCiR1iC

Today, they are trying again…

Insanity outside the White House. Three warnings of an unlawful assembly from the Secret Service before storming into the crowd.

A lot of people have been hit with paper spray. In all the chaos, at least one person was tossed to the ground and presumably arrested. pic.twitter.com/Ab2eSkq9CS

In Texas, terrorists started fires, looted businesses, and terrorized people who were just trying to work and feed their families.

Police are standing down

In Minneapolis, rioting, looting and choas reigned down on the public for the fifth night in a row.

In Portland, Masked militants attacked the Justice Center in downtown Portland. Many came prepared with chemicals to start fires and weapons to break windows. They also looted and set businesses on fire throughout the city.

Looting still happening with impunity in downtown Portland. They clear the businesses of goods and then someone goes in with a chemical agent to start a fire. #antifa #BlackLivesMatter pic.twitter.com/uFFT168Csa

Portland: Antifa & BLM smash buildings, they go in to loot, then they set it on fire. #antifa #BlackLivesMatter pic.twitter.com/nj0ah9VO1z

Rioters have broken into Portland’s main mall in downtown & began looting the @LouisVuitton. Youths ran out with designer bags. They shouted about expropriation. People online are cheering about how this is targeting wealth inequality. #BLM #Antifa pic.twitter.com/jPDSsyxzJm

At this point, the chaos has overtaken cities in almost every state…

Breaking: Rioters have set the Market House on fire in Fayetteville, North Carolina. The Market House is a National Historic Landmark, which has ties to slave sales in the 19th century. pic.twitter.com/jfEM4GijFI

“Here’s some stuff going on in downtown Rochester NY right now. It’s easy to find more clips if you look at the SnapMap and find the spots where protests are taking place.” — https://t.co/QViXfCowOm pic.twitter.com/ieEF03dqvL

Even in Salt Lake City, Utah chaos has overtaken the town.

Protest have found their way to Salt Lake City. That’s how you know shits serious pic.twitter.com/3pQ5sbBeWL

Today, we couldn’t have painted a better picture of where we are as a nation. On one hand, we witnessed hard-working Americans returning to space for the first time on a private business’ rocket. On the other hand, you have an entire political party who are trying to destroy everything we worked for.

The contrast and the agenda couldn’t be more apparent!