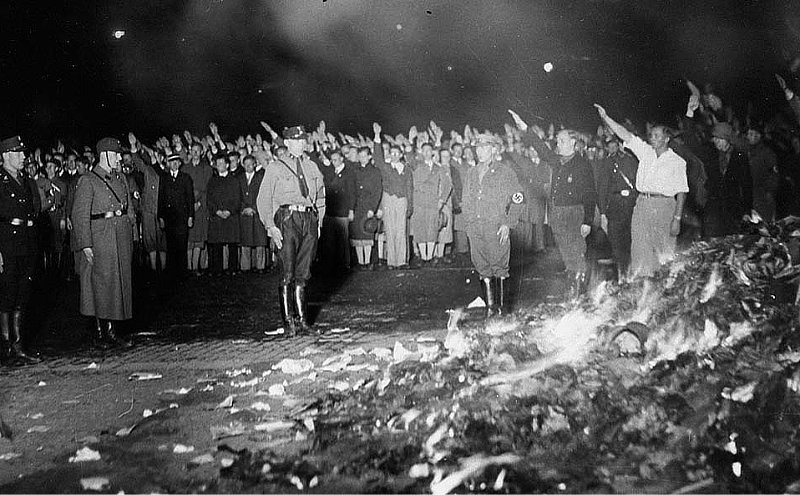 How many people know your history? Do you know about the book burnings ordered by Hitler during the 1930’s? Have we learned from history? Answer: Seems not.

The book burnings are no different (in my view) of what has been happening on all Big Tech platforms today. Silencing non-conforming voices. We are quite literally witnessing a parallel of what Hitler did. Except information exchange in his day were books. Today, it’s the internet and the voices of many people.

One of the first targets of Adolf Hitler and his Nazi organization were books. This began in 1933, shortly after Hitler seized power in Germany.

He ordered leaders of the regime to confiscate and destroy any literature deemed subversive to the National Socialist agenda.

The elimination of these documents was carried out in a ceremonial fashion. Public book burnings were held for all the citizens to view.

Sound familiar? Yes indeed, it does.

I have written about this quite a number of times since NOV-2016 when it all began in earnest. I’m writing about it again. Why? Because it has ramped up to a frenzy. A clear and present danger to our Republic.

The BLM movement and “cancel culture” is destroying this nation. Right now. It’s all fitting quite perfectly with the CMG (ChicomMarxiGlobalist) agenda which they intend to fully implement NOV-2020.

All Big Tech platforms are aiding and abetting the silencing of non-conforming BLM / CMG voices. These voices range from ordinary individuals expressing opinion on these platforms to very large and popular websites which challenge their agenda.

There is a very powerful push to demonetize anyone or any site that is “non-conforming”. How are they doing it? They’re going after the advertisers on these sites. Google is banning all of their ads. Many advertisers are caving in under BLM pressure (just one example) and pulling their ads. Additionally, entire profiles and sites are being taken down entirely from their platforms.

The “woke” crowd is targeting anyone and everyone they find who is non-conforming. Of course the “bigger fish” are their preferred meal right now. But they are coming after ALL of the fish. Once a target is identified that person or site, business, organization… is publicly ridiculed and essentially told to bow down, take-a-knee to BLM (or whomever group is doing the targeting) — or else…

The “or else” is a lot of things. However their rabid attacks are largely effective in silencing the targeted non-conforming voice. Because they don’t want to lose their income.

I am stunned by the extent at which this is occurring right now. Statues and historical symbols are being torn down. Companies of all sorts are removing any and all potential references which might upset the “woke” crowd. Packaging is being changed on so many traditional products we’ve become accustomed to. TV shows are being taken down because they’re about cops (for example). Cartoons that have guns are being taken down or the “gun” removed (Elmer Fudd is one).

There are just so many examples of the insanity. We are literally being attacked. Our culture. Our history. We are being told to conform or lose our revenue stream. But they won’t stop there. They’ll get physical. And they have.

Headed to a Takeover

It is so crystal clear to me. Everything that has been happening. We are headed straight to a takeover. The books have been burning for almost 4 years. But these past months have amounted to a record pile of smoldering books.

We’re at a point where the CMG arsonists (mainstream media and others) are throwing gasoline on the books and lighting them on fire in plain sight. For all to see (reference Hitler’s Nazis who did this in the public square). They are NOT hiding it. They DO want to scare those of us who are non-conforming.

You Need to Choose a Side in this Fight

Well guess what? They can pound sand. I will NEVER bow down to an organization like BLM who wants to de-fund the police. Who chants “What do we want? Dead Cops. When do we want it? Now!” We are witnessing a spiraling out of control attempt at “revolution”. Except this one is all about the CMG’s.

It Will Come To Your Door

It WILL come to your door sooner or later. You will be placed in a position where you will be forced to express which side you’re on. And then face the consequences. If you are discovered to be non-conforming, you will be targeted.

You need to choose sides. Right now. And get ready for what’s coming, because it is coming. If you do not go along with this craziness, you are going to have to stand up and fight for yourself. Be it figuratively or literally.

My high concern is knowing there is a very large number of people in this country who are extremely fed up with this crap. Most of these people are not the type to throw the first punch, so to speak. But once that real fight begins, it’s “all in” baby…

So, don’t let these “woke” pukes shout you down. They’re a bunch of brainwashed brownshirts who are being the “useful idiots” of the CGM’s. Don’t let them win. Because you’ll lose your country.

Ultimately this comes to fruition in November (unless they light it up sooner).

Prepare now. Because they might try and lock us all down again. The messaging in the mainstream is indicative. They’re riling up the Wuhan “2nd-wave” fears as we speak. The Chicoms are playing a role in this. Plain as day. MSM is lapping it up and will attempt to scare the daylights out of everyone once again. More lockdowns and control. Shortages (worse this time). We shall see. Prepare for the worst. Prepare for November. Do it while you can.

[ Read: Bullies of the New Left | An Organized Force of Brownshirts ]

[ Read: You Better Take a Longer View of Preparing Because Day-One is NOV-3 ]