My involvement with the AR platform goes back for many years.  I had tinkered with them for a long time and when I opened my gun store, I began to build AR’s in earnest.  Over time I built almost every conceivable legal variation of an AR platform but never really got into the AR pistol. AT that time, the ATF was not too sure what the classification of these hybrid platforms was going to be, so I stayed away.

After I closed my store and retired, I had more time, the ATF had finally issued what seemed to be some solid and final rules about AR pistols and I thought it might be time to explore this unique gun.  I had a lot of extra parts laying around my workbench that eventually became several short-barreled and properly registered rifles and several AR pistols.

Here is What I Found as the Best AR Pistol Optics

I found several optics that I thought met my criteria well enough to consider.  Let’s look at each of these, in turn, consider the pros and cons, the features, and my feelings about these optics. 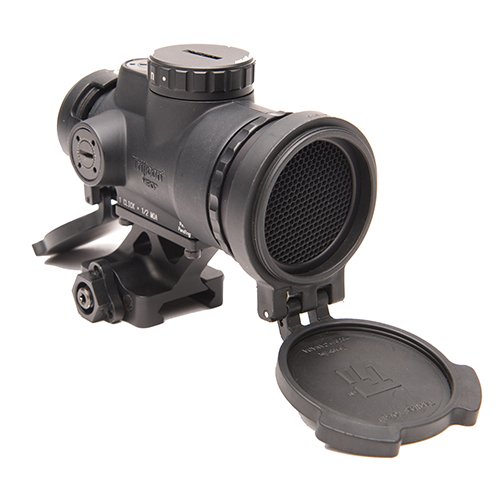 When I consider what to mount on an AR pistol that is going to be used by a law enforcement officer as a patrol duty rifle, some of my priorities change.  This is a working gun that needs to perform flawlessly anytime.  The same is true for the optics.  I consider any gun I build or modify for a law enforcement officer to be a weapon that is going into a combat situation and must perform to those standards.

My recommendation for an optical sight to mount on a patrol duty AR pistol is the Trijicon MRO.  There are several reasons not the least of which is Trijicon reputation for building some of the highest quality reflex and red dot optics on the market.

MRO stands for Miniature Rifle Optic and it is certainly descriptive. The MRO line of Trijicon optics comes in several variations.   After much consideration, I chose the Trijicon MRO-C variant.  There are three main reasons for this choice.

Those, of course, are not the only features that make the Trijicon MRO a standout optic choice for a patrol rifle or AR pistol.

A survey of users of the Trijicon MRO Patrol optic consistently scores this optic among the best.  Among the comments most seen were

It is hard to find a bad review of comments about the Trijicon MRO Patrol.  There were a few, and after investigating the reasons, it became apparent it wasn’t the Trijicon MRO that was to blame. It was a counterfeit optic that had been purchased online.

This is becoming a bigger problem, and as a buyer, you should beware.  Make sure you are dealing with a reputable dealer and know the telltale signs of forged, counterfeit products.

For a patrol rifle, the Trijicon MRO Patrol is my recommendation.  The downside is the cost.  Currently of relatively cheap high-quality AR pistols, you can easily spend more on the optic than you do on the rifle if you choose the Trijicon.  However, if you are betting your life on the performance of the optics, it is probably not that much of a problem. 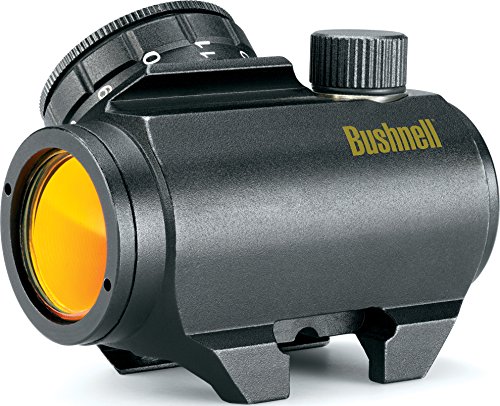 If you are building or buying an AR pistol to have around as a home defense weapon or just to take to the range for a bit of fun plinking and you want a good all-around optic, I have to recommend the Bushnell TRS-25.  This little gem of a res dos sight from Bushnell’s is one of the best low-profile red dot sights on the market for the price.

Bushnell has a long history of producing optical sights that are exceptional values when you consider price and features.   Bushnell never scrimps on features, so it is no surprise that the feature list on the Bushnell TRS-25 is rich.

This little scope is a darling among its many users.  It gets high marks for the mounting system, the brightness of the lenses, and its accuracy.  Among the most common sorts of comment are

Once you get past the fact that this is not an $800 ACOG, there just don’t seem to be too many complaints, and the once that we did find were very rarely concerned with any real issue with the Bushnell TRS-25.  Most of them were caused by either over-expectation about a $100 scope or a failure to follow directions.

As with most of the other scopes we have reviewed, it is especially important to be on the watch for counterfeits.  The Bushnell TRS-25 is no exception.

How We stack up the Bushnell TRS-25

For the average shooter who wants a scoped AR pistol for home defense or general shooting, we can’t think of a better choice of red dot scopes than the Bushnell.  The glass is high enough quality to provide excellent shooting capabilities and the construction is rugged enough to stand up to lots of range handling and traveling.  For the price, the Bushnell TRS-25 is our choice as the best overall red dot sight. 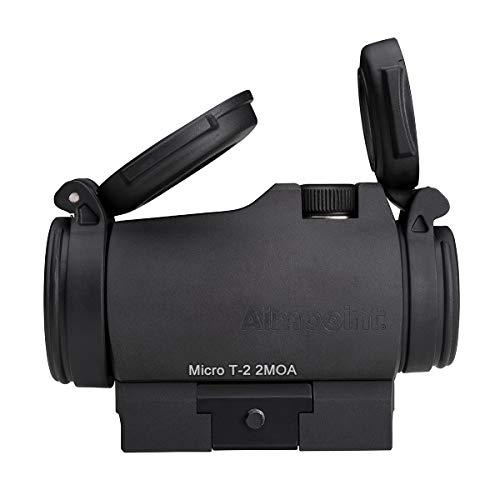 If money is no object and you absolutely must have the Ferrari of the red dot reflex sight world, the answer to your quest is the Aimpoint Micro T-2 sight.  This is the standard by which all other sights of this type are measured when it comes to performance, durability, and craftsmanship.  It’s no wonder that this micro sight is fast becoming a choice for law enforcement and among military operators.

Aimpoint reputation as the go-to sight for combat operations has spilled over into the civilian world where many hunters and other shooters expose their sights to the same sorts of conditions that soldiers see in combat.  If you want the best possible scope for an AR pistol, the Aimpoint is your stop to shop.

User expectations of an optic in this category are high among users and Aimpoint tends to deliver consistently.  A survey of user comments returns many which reflect these feelings.

As with most of the other sights we have reviewed, the biggest complaint is the pervasive number of counterfeits on the market.  We could not find a single complaint or criticism of the quality of the Aimpoint sights, but over and over were the tales of purchasing a sight only to find it to be a counterfeit.  Shop wisely and carefully.

The most expensive sight in my list is the Aimpoint Micro T-2.  Many of the features that are standard on this high-quality sight are things that will not ever be a need in my world.  I certainly don’t expect to need a sight capable of being submerged to 80 feet and then come up fighting.  Just not my style.  On the other hand, if I could afford it and I carried a patrol rifle every day knowing I might be in a position to depend on it, I would certainly have to consider the Aimpoint Micro T-2. 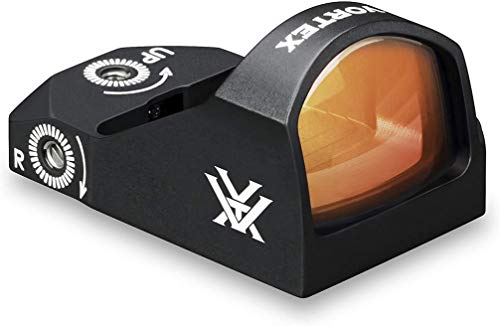 This is my personal choice of a Reflex Sight for my AR Pistol. I originally bought my Vortex Venom to mount on a Glock 19.  However, the Glock project didn’t happen, and I was left with this little holographic reflex sight sitting in the box in a drawer.  After I built my latest AR pistol incarnation, I was thinking that the AR is a pistol, and the Vortex Venom is a pistol sight, let’s give it a whirl and see how it rocks.

I was pleasantly surprised at the result.  The Vortex Venom is a very low-profile holographic reflex sight.  The controls and adjustments are set up to be sleek and offer no problems with snags or inadvertent adjustments.  Since my intention was to build an AR pistol that was as small, lightweight, and, dare I say it, concealable, this sight turned out to be the perfect addition.

Vortex build goods stuff.  I am a big fan of Vortex optics and several of my rifles sport other Vortex scopes.   The features and reputation of Vortex make the Venom sight a no brainer for me.

An AR pistol is a true hybrid.  Not really a rifle and not really a pistol.  It is a beast that resides somewhere between the two.  It was obvious to me that the solution for an optical sight had to fill the same sort of hybridized criteria.  After months of research and range testing, I came up with what I think is a set of things that anyone who wants to mount an optical scope on an AR pistol should consider

Why My Choice? Vortex Venom…

I figured if this sight could stand the ride on top of a Glock slide, it could certainly withstand the forces imparted by the recoil of an AR pistol.  So far, this has held up.  Currently, there have been several thousand rounds go through my AR pistol in various training scenarios, and the Vortex Venom just keeps on working

This gun’s home is in a nice lockable rack behind the back seat in my pickup truck.  I wanted a sight that didn’t add any more height or weight to the rifle than was needed, and the Vortex Venom certainly fit that bill.  I have increased the height just a bit by adding a three-slot riser rail under the sight to give me a little more leeway in getting a sight picture.

This is certainly not a budget red dot.  It is also no ultimate red dot.  It is affordable enough for most shooters to work into their budget and it certainly delivers on the operation and features.  It was a fortuitous accident that I had one in a drawer, but I like to think I would have ultimately chosen this sight for my AR pistol.

The objective is always to find the right tool for the job, which is the right size, and matched the job needs.  Picking an optic for any gun is the same.  There are certain criteria that must be met, but, in the end, the way it fits your shooting style and your wants is a huge part of the decision process.  I hope my information and my observations about reflex sights for AR pistols help you in your decision process.

If you have any ideas, observations, or experiences with red dot reflex sights and AR pistols, please share them in the comments below.  We love to hear from readers and often learn as much from our followers as they learn from us.