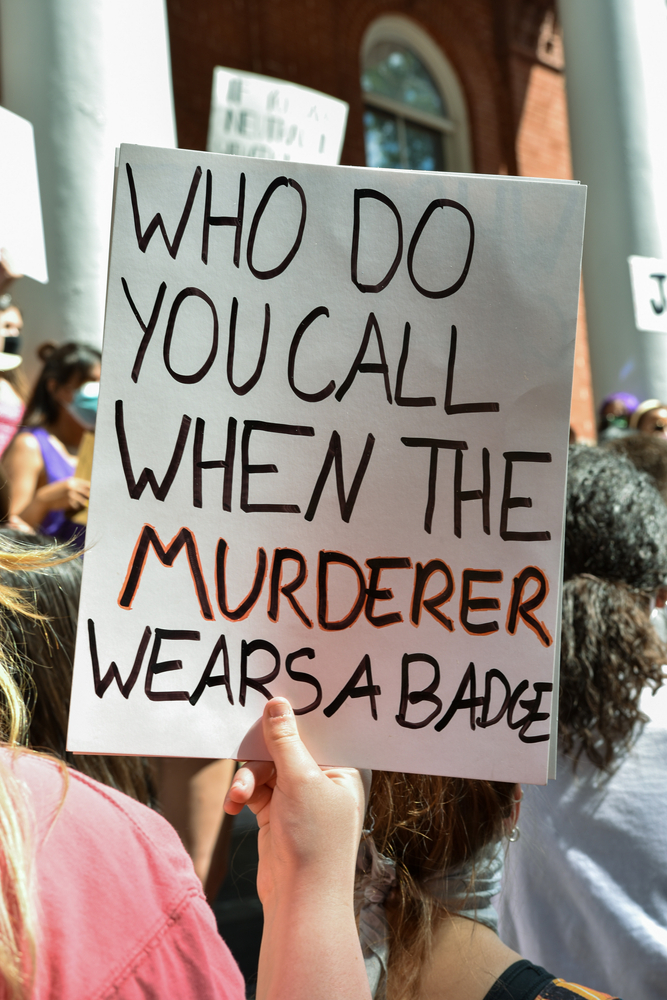 The killing of George Floyd by a Minneapolis police officer is one more tragic stain on our nation’s history.

That such things can happen at the hands of someone working for a government agency is something we should all be concerned about and saddened by. When government agents start killing people, there’s no saying where it will stop. What starts as a single horrific act by one man against another can quickly engulf society.

No, this isn’t the first time this has happened. We all know of other times, each of them a tragedy. I will never condone one person killing another unless it is in an act of self-defense. Even then, we should use no more than minimal necessary force to protect ourselves. Killing is not necessary if you can drive the killer away.

Floyd’s murder was clearly not an act of self-defense. The man was on the ground, shackled, and crying out for his life. There is no way that anyone could say that he was a threat. There was also a medical professional there, who was telling the officer with his knee of Floyd’s neck to check Floyd’s pulse and make sure that he was okay. The officer chose to ignore her. That video has gone viral too.

First, the four officers involved in this crime were fired. Then the officer who killed Floyd was arrested for third-degree murder. Finally, his wife filed for divorce. Apparently she doesn’t agree with what he did either. So hopefully justice will be done. It needs to be, not only for George Floyd’s sake but for the country’s sake.

But those actions aren’t the only thing going on. Since the murder came to light, it has sparked demonstrations, many of which have turned into riots, in dozens of cities. Those who are protesting and rioting are angry about this needless death and reacting out of that anger.

Why are they angry?

There’s clearly a racial element to that anger, as the police officer was white and the man he killed was black. But I don’t think that’s enough to explain away the anger that I’m seeing right now. There’s a chance, and I’d say it’s a pretty good chance, that the anger is magnified from what it would normally be because people are already angry over the lockdowns.

This growing anger is something that has been largely ignored by the media, but that doesn’t make it any less true. We’re seeing more and more protests of the lockdowns, which are destroying families and small businesses. People have lost their livelihoods and many won’t be getting them back anytime soon.

When people are already angry about one thing, it’s considerably easier for them to get angry about something else. So, while the death of George Floyd is enough to anger many people, the reaction we’re seeing is much bigger than we might otherwise see.

Part of that isn’t raging though; or at least not the normal sort of rage that people feel. It’s the rage that’s being paid for by someone. For the last several years, whenever something like this has happened, “protestors” have been imported into the cities to spark violence. These people are paid and trained, getting things stated and then slipping out before they can get arrested.

One has to understand a bit about mob psychology to understand what is happening in these cities. What may very well have started out to be a peaceful protest, turned into mob violence. It has happened over and over again. All it takes is a few agitators, feeding on people’s anger to get things going, and then “show the way” by getting violent, and many, perhaps even most, people will follow. Once the violence starts, it feeds on itself, growing and becoming worse. The agitators slip away.

People in that mob lose their capability of thinking for themselves. They follow the mob, doing what the mob is doing. If the mob is rolling over someone’s car, they help push. If the mob breaks a glass storefront and starts looting, they see what they can grab. If the mob beats up an old lady in a wheelchair, just because she’s in their way, they join in.

Once that anger is kindled and bursts into flame, it’s hard to put it out. Any attempt to put it out is seen as an attempt to control them, treating them like children. That just infuriates them even more. One basically has to allow the anger to burn out or catch them and lock them up.

Now, here’s the rub; most of the people in that mob would never do the things they’re doing if they weren’t in the mob in the first place. They are basically law-abiding citizens. Oh, they might speed or not stop fully for a red light; but they’re not criminals. They were just caught up in the moment.

I’ve talked about these sorts of people before, as being those who live on the edge of the law. They really don’t do anything wrong most of the time, because they are afraid of the consequences. But when a crisis happens, they are likely to slip over onto the dark side, because of their desperation. This is the same thing; people are rioting because someone played upon their emotions, making them feel desperate.

Don’t Get Dragged In

The people who organize these protests, and they are always organized, are planning on people showing up and taking part. They’re not just looking for any people though; they want people who are already mad about the situation, even though their anger is under control. They want those people because it is easier to manipulate the emotions of someone who is already mad than to do so with someone who is thinking rationally.

That should be enough of a reason to keep you and me away. Since we know how they want to use people in that situation, it seems rather clear that the best place that any of us can be is anywhere else. It’s pretty hard to get dragged into it if you’re not there, but it’s also hard to stay out of it if you are.

Actually, being present and staying out of the mob violence is dangerous, as the mob will see you as an enemy and might very well attack you. Should that happen, no gun, no amount of ammunition can protect you. There’s no way you can shoot them all before they can beat you to death.

This is not the time for curiosity, nor for going to try and speak reasonably to someone. As I just said, if you’re not part of the mob, you’re an enemy. Standing on the edge or even some distance off, just trying to see what’s going on isn’t safe, because there is no way of telling which way the mob might turn and what or who they will decide to attack.

If you have an all-news radio station in your city, that can be a great asset in trying to find out what’s going on with any mobs or riots. The other option is using a police scanner to keep track of what the police are saying. Knowing what is happening can help you to avoid it.

If Violence Erupts Around You

Of course, we don’t always have a choice of staying away. There’s the possibility of violence erupting around us, even if we don’t have any part of it. I’m sure that’s what happened to many of the business owners in Minneapolis and other cities where the riots have ensued. Those business owners can’t just pick up their businesses and move them elsewhere. They either arm themselves to protect their businesses or they turn tail and run, getting out of the way until the mob disperses.

Surprisingly, there have been a number of business owners who have succeeded in defending their businesses and scaring off the mob, not only in these riots but in previous ones too. But in every case I’ve seen, that wasn’t just one man defending his business by himself, with a handgun, but rather several men in tactical gear and long guns standing guard, usually on the roof. So, while that is possible, it’s a risky action to take. Should the mob attack that business and the guards retaliate, they would most likely go to jail for mass murder.

To repeat myself, in most cases, the best thing you can do is to get out. But that might not be easy to do. It’s usually not possible to just walk out of a mob situation, without attracting attention to yourself. Rather, you’ve got to work your way out gradually, first getting to the edge of the mob and then finding an opportune time to slip off down an alley or through a store.

If the mob is moving, it offers an ideal opportunity to escape. All you need to do is walk slower than the mob is moving so that they move away from you. Once you are outside the perimeter, you can move off in another direction, perpendicular to where the mob is going.

While you are in that mob, you need to act like you’re part of it. If they’re yelling, then yell with them. If everyone is shaking their fists, then shake yours. Don’t let them get the idea that you’re not one of them, or they might turn on you.

With everything going on in the country right now; the pandemic lockdowns, the high unemployment, and financial problems, and now with this atrocity, I’d expect a lot more violence in the next few months.

As a nation, we’re at a point right now where people’s blood is already boiling. So it won’t take much for people to go over the tipping point. We’ve already seen it happen with this situation. We don’t need to see it happen with any others. Watch out for what the media is saying and the message they are putting out. In many cases, it’s not there to inform but to stir the pot. Well, this is a time when we really don’t need the pot stirred anymore.