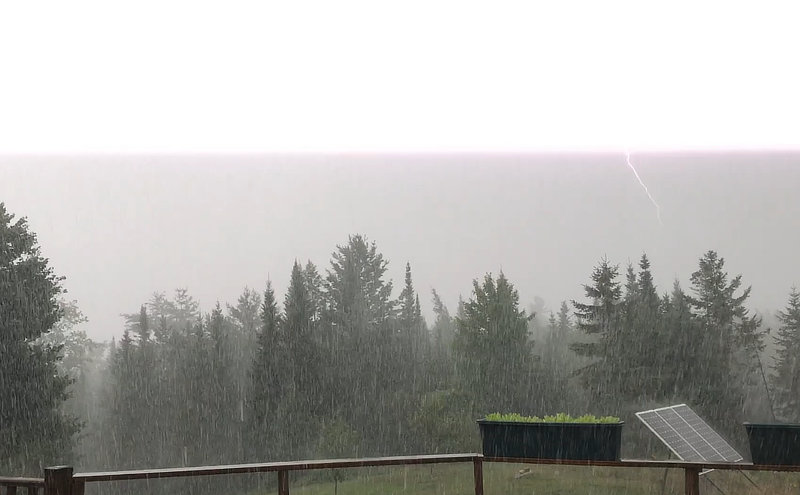 Lately, every afternoon we have been getting thunderstorms. In fact they’re all around me right now as I type this…

I dug through my files and found it. There was a severe thunderstorm warning and I saw one coming as I watched my radar app. So what did I do? I decided to video the event.

Actually the entire video is 10 minutes long from when it began until the rainbow appeared over the mountains. But I snipped out a 20 second segment which began 2 minutes into the video itself.

I opened the slider to the deck and started filming (not recommended)….

Thunder and Lightning picked up in intensity. Getting closer. Then two minutes later a bolt zapped directly overhead!

You know how that goes… You see the extra bright flash with it’s crisp accompanying zap — and you cringe as you know that a few milliseconds later the air’s going to explode. And it does…

Here it is for your viewing and listening pleasure:

The result was a blown up internet modem and external router. Down for a few days till the replacements arrived.

So why am I posting this? Well, severe weather events can be exhilarating to observe. But dangerous too. It wasn’t too smart of me to be standing in the open slider doorway filming this. I won’t do that again!

Lightning is the obvious danger here. They say if you can hear thunder, lightning can strike at your location (even if it’s seemingly far away). There are some lightning bolts that can travel great distances. Ever heard of a bolt out of the blue? Well, it can happen!

So anyway, I thought I would share the video segment for fun…

Here’s a thought: Lightning Protection for your house. EMPShield.com makes various devices for this type of protection, depending on your application: 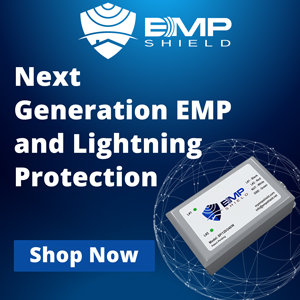