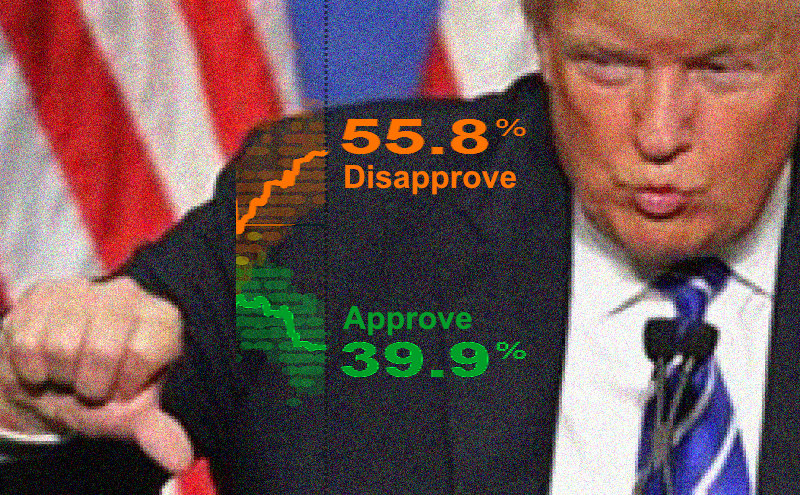 Donald Trump’s disapproval polls are running at approximately 56% right now, during the end of June.

An aggregate of polls taken since early May indicate two months of increasing disapproval, as seen in the graph above extracted from projects.fivethirtyeight.com.

I stay on top of several very popular podcasts and I can assure you that many on the right are upset with Trump at this juncture. As the ongoing and increasingly intense mainstream attacks take their toll, many are beginning to fear that his re-election may be in peril come November.

I happen to be one of them. I sincerely believe that he’s in trouble. And it may be too late to turn the tide for a number of reasons.

The MSM promotion of Covid Round #2 is well underway. More lock-downs and restrictions may be in our future – further crushing the (un)United States economy. This would bode VERY WELL for Trump’s opposition (which is why they’re promoting it).

A few weeks ago I wrote, “It is going to get real during the evening of November 3, 2020 as votes are counted. Election day. There are going to be LOTS of very unhappy people the morning of November 4.”

My meaning was that regardless of the outcome, it’s going to be quite potentially “bad” given our current societal breakdown and division. But in my opinion, if “the right” fails to turn up a victory, this nation is finished. And if the Senate is also lost (which it may), the transition will proceed quite rapidly.

At this time, my gut is telling me that this is a likely possibility. What about your gut?

Signs That Trump Is In Trouble

I snipped a few headlines from drudge this morning:

And that’s not all. I’m seeing it everywhere. Reports of dwindling support, or at least of frustration.

The polls indicate his disapproval. But why?

There’s always going to be a big chunk who will disapprove regardless of the person in office (because they’re just hard-core dems or repubs. And they’ll always disapprove of “the other side”. But this time it’s deeper than that.

There are those who voted for Trump who may not this time around. They’ll either stay out altogether (the most likely scenario), or maybe vote the other way. Either way, that’s bad for Trump’s reelection chances.

The attendance at the recent Tulsa rally was a disaster for Trump, given the comparison with his pre-Covid rally numbers which drew 10’s of thousands. This time I believe there were ~ 6,000 in attendance. Granted, Biden could maybe pull a hundred or two on a good day if he paid them, but the orange man isn’t looking good in this regard…

I believe that he has some very bad advisors around him. He surely has a number of “enemies within”. No doubt that being in the presidential cocoon isolates him from reality (as any president). You only know what’s being reported to you. It seems like he’s lost touch with the street and our primary concerns.

The riots. The BLM/Antifa Marxists tearing down statues and our nation. Last I checked BLM was at 62% approval among Americans – higher than any president or political party by far. What’s that tell you?

What has Trump done about stopping these communists? Answer: nothing. All talk. No-one is rounded up and charged with a crime as the rampage continues.

De-fund the police movement. It seems insane. But it is popular. Has Trump done anything to curtail this movement? No.

Now I’m hearing that his advisors are telling him to go back to illegal immigration and border issues for the upcoming election / platform. What? That’s not what has most Americans concerned today… It’s the riots. Antifa/BLM. Covid. Crushed economy. Americans are scared and do not feel so secure anymore. If he starts beating the drum on illegals again (which WAS a smart campaign issue during 2016), it will be the nail in the coffin.

He needs to wake up to America’s concerns and DO SOMETHING instead of talk talk talk.

You Better Start Preparing For A Loss

At this rate, Biden’s going to win. By hook or by crook. As you well know, he has dementia and has had several strokes. He’s a shell (sad to say). His VP will be the president. More importantly, the powers-that-be who have been attacking Trump and all conservatives the past 3-1/2 years will be “all in”. And if you lean “right”, your “rights” are going to be crushed (particularly your 1st & 2nd). So you better think about that.

You will technically have until inauguration on January 20 when the new power structure takes over. Then all bets are off. If the Senate is held, that will likely stop some of the worst legislation. But I’m not holding my breath on that one. Why? Because we might lose the senate. Or even if we don’t, most of today’s repub politicians are spineless wimps – feathering their nests.

Executive orders. Sure, both parties have it while in office. But imagine a Marxist government head?

A clean sweep. This could happen. House/Senate/President. If it does, watch out below. The speed at which “change” takes place will be dramatic and severe.

We still have four months until November. Look what has happened already so far this year. It’s insane. I have a bad feeling there’s more in store for us. We are living through a great battle for this nation’s soul. Right now it appears we’re leaning to the dark side. Let’s just hope that it’s not “Lights Out”.