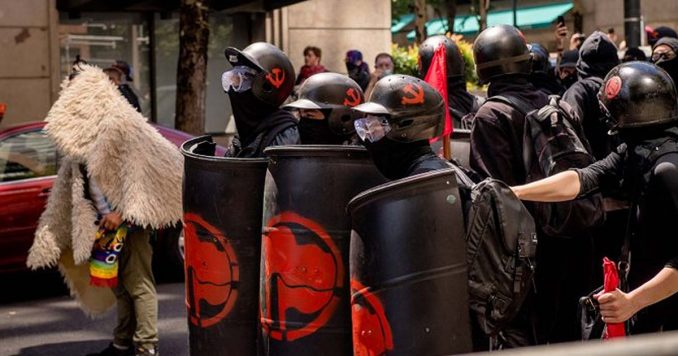 Radical Antifa terrorists have teamed up with the terrorist group BLM to plan brutal attacks on whites to incite racial tensions throughout the country. As the nation burns and looters have turned almost all 50 states into a warzone, radical leftwing organizations have increased their violent attacks and have begun targeting patriotic hard-working Americans.

In Portland, Antifa terrorists brutally beat a man for carrying an American Flag.

Portland: A man brought an American flag to the antifa/BLM protest (later riot). He is confronted & then sucker-punched by a man wearing a “F— Trump” shirt. The mob rushed in to beat him. He never let go of the flag. @PortlandPolice did not help. #Antifa #BlackLivesMatter pic.twitter.com/OAP6L0THeE

When another man tried to come to his aid, the mob beat him unconscious and kicked out his teeth.

Portland: A man tried to help the man carrying a US flag who was getting beaten on the ground at yesterday’s antifa/BLM riot. They chased him away and kicked him in the face when he was unconscious on the ground: #Antifa #BlackLivesMatter pic.twitter.com/xqKTYT5tPl

Today, in Rochester, New York a woman pleaded with rioters to spare her business. Instead, they punch her in the face and started attacking her with a 2x4s. Her husband tried to help but was beaten back.

A Rochester, New York woman pleads with rioters to spare the business. They punch her in the face and strike her with a plank of wood. Her husband tried to help but was beaten back. #BlackLiveMatter #antifa pic.twitter.com/WAstcRUuqH

Last night, BLM terrorists beat a man nearly to death for defending his shop from looters.

These people are fucking animals.

They’ve just lynched a man attempting to protect his shop.

All because “black lives matter”.

This morning, President Trump announced on Twitter that his administration would be designating ANTIFA as a Terrorist organization.

The United States of America will be designating ANTIFA as a Terrorist Organization.

They are using a tragedy to stoke the flames and push the country over the edge. You won’t see this on CNN, becuase they don’t want you to know they are destroying black neighboorhoods while pretending they are protesting police brutality!

When you riot, you ruin the lives of innocent people. pic.twitter.com/hMi2RRNlsS

And when these rich Hollywood celebrities and idiot kneeling sports millionaires pretend they are in it for the cause, just remember this. A couple of days ago, millionaire NBA star Chris Martin Palmer was encouraging rioters to burn it all down (keep in mind the photo he tweeted was a low-income housing project in a black neighborhood being burnt to the ground)… Just days later when rioters breached his rich gated community his tune changed, calling the same people animals!